The Rink Exchange officially opened as Lane County Ice Arena on December 22, 1989, after extensive community effort convinced the Lane County Commissioners and the Fair Board that an ice arena in the old horse arena at the fairgrounds could work. The grand opening skating exhibition featured Tonya Harding, at that time the top figure skating competitor from the Northwest. Our group lessons had waiting lists for classes and full rosters at every level, while public session skaters waited in line for a chance to skate. The initial coaching roster had a dozen or more coaches in order to meet the demand of group and private instruction skaters. 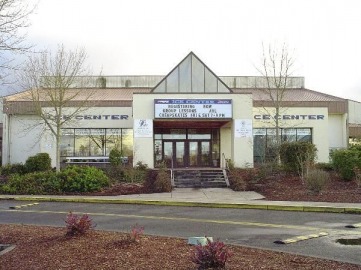 By 1995 the figure skating program included freestyle sessions for private coaching opportunities, and clinic ice for power and ice dancing practice. With the popularity of the annual holiday ice show productions and ISI team competitions, additional clinics were added for performance teams and synchronized skating. Our week-long Skate Camp was introduced in 1990 and the rink held its first annual ISI Love to Skate Competition in February 1992. Not long after that the new Eugene Figure Skating Club began to hold invitational USFS competitions and the “skating bear” became a staple of the Club’s fund raising efforts. In 1994, and again in 2000, the EFSC hosted the Pacific Coast Sectionals Synchronized Skating Competition. These tremendously successful events helped to put the Club “on the map”.

There are some very special memories in our 20 year history, not the least of which are the skating extravaganzas held during the Lane County Fair. In 1990 Richard Dwyer, Mr. Debonair, brought the first fair show for a six-day, two shows a day performance run. Even our Lane County Ice coaches, including Vance Kirklin and Cindy Jensen, skated in that first big production at the Ice Center. In the years that followed we enjoyed many wonderful fair shows featuring Scott Hamilton, Peter and Kitty Caruthers, Brian Orser, Elizabeth Manley and Paul Wylie. Local skaters have had great experiences producing the Country Coach Shows as well as our traditional holiday show, which benefits the United States Marine Corps Toys for Tots program.

The Rink Exchange has become a regional mecca for hockey with a strong Learn to Play program. The Lane Amateur Hockey Association has been a mainstay of the Rink Exchange from the beginning producing both a house league and a travel league. With the reemergence of an elite level Junior B team, hockey is proving to be both a recreational and competitive power at the Rink Exchange. It is great to see beginning hockey instruction coexisting with beginning figure skating classes in group lessons and our schedule allows for both groups to get the ice they need for their programs at all levels of performance and play.

Through the years the Rink Exchange has sustained a solid core program of group lessons and clinics, as well as maintain special traditions such as the Holiday Show. The Rink Exchange currently has outstanding figure skating coaches and continues to provide a solid instructional program with a wide variety of skating opportunities.

WHY CALL IT THE RINK EXCHANGE….
A twitter follower simply asked, “Why is it called the Rink Exchange.”

As with most things that seem simple on the surface, the answer is quite a bit more complicated and speaks to the history of the place itself. So, let’s call this the ultimate TT.

The ice rink itself was built (well repurposed) back in 1989. It was a project Lane County completed with the help of a lot of local citizens many of whom still skate at the rink today. The building used to be a Horse Barn. The rink, in the first few years, was incredibly popular with a pretty large user base, especially when it came to public skating.

Fast forward to 2010 and for various reasons, with the County itself facing large budget cuts of its own, they decided that the rink was no longer an asset it wanted to finance directly. The rink itself was losing close to $250k per year and by some estimates needed over $1 million in maintenance upgrades.

At the same time (since 2005) the Eugene Generals had been operating in the facility as the area’s premiere hockey team playing at the Junior level. When 2010 came along, and the rink decided it needed to shutdown, the Generals came to an agreement with the County that allowed it to operate the facility. The asset (building, land, etc.) would remain public property, but the operations (maintenance, staff, etc.) would be a private venture.

As with all things of this nature, the first year was a “kick the tires” kind of year. The Generals were asked to operate some sections of the rink (namely Public Skating Sessions, some scheduling, and the pro shop) while others including staff and private ice rental remained under the County domain.

With the pro shop being operated privately, it needed a name. At the time, it was assumed that the model that was established would remain. The Generals would only operate public skating sessions and the store. So the team needed to come up with a name that kind of equated with with the Generals. Some on the staff had served in military circles and the name needed a Generals theme. Given it was a store, the name Rink Exchange was crowned. An exchange on a military base is a store where goods and services are bought and sold. It was a good description of exactly what was going on at the time at the Rink. The Rink Exchange was the middle man between the public and the County in exchanging goods and services (namely ice).

Well, as luck would have it, the roles grew, rather quickly. Soon the Exchange had it’s own phone number, email addresses, and services. Little by little, the roles increased from operating the pro-shop to running the entire facility completely independently but in partnership with the County. This occurred in June of 2011. By then, the name kind of stuck. The internal users already knew it as the Rink Exchange and with any brand, we just decided it needed to be introduced to the public.

To this day, it really is an Exchange with the ice being the primary good. But services are a huge part as well with major user groups participating in the development of ice sports as well as Rink Exchange run programs such as Adult League, Adult Learn to Play, and Learn to Play for Youth.

The Rink is growing and in some circles larger now than ever in the past. Public skating sessions routinely fetch 150 plus skaters and during the Christmas season that number grows to be over 200 plus skaters. The youth hockey program now sports over 250 participants (a large size as a percentage of the population) and there are now 16 adult league teams playing out of the Rink.

The Annual Eugene Figure Skating Holiday Show brings participants from all over the region and brings in upwards of 500 viewers of the show and unwrapped toy donations at this event benefits the local “Relief Nursery”.

So as you can see, it really is an Exchange that has brought Ice Sports back into the forefront of the community.